Generation of functional hematopoietic stem and progenitor cells (HSPCs) from human pluripotent stem cells (PSCs) has been a long-sought-after goal for use in hematopoietic cell production, disease modeling, and eventually transplantation medicine. Homing of HSPCs from bloodstream to bone marrow (BM) is an important aspect of HSPC biology that has remained unaddressed in efforts to derive functional HSPCs from human PSCs. We have therefore examined the BM homing properties of human induced pluripotent stem cell–derived HSPCs (hiPS-HSPCs). We found that they express molecular effectors of BM extravasation, such as the chemokine receptor CXCR4 and the integrin dimer VLA-4, but lack expression of E-selectin ligands that program HSPC trafficking to BM. To overcome this deficiency, we expressed human fucosyltransferase 6 using modified mRNA. Expression of fucosyltransferase 6 resulted in marked increases in levels of cell surface E-selectin ligands. The glycoengineered cells exhibited enhanced tethering and rolling interactions on E-selectin–bearing endothelium under flow conditions in vitro as well as increased BM trafficking and extravasation when transplanted into mice. However, glycoengineered hiPS-HSPCs did not engraft long-term, indicating that additional functional deficiencies exist in these cells. Our results suggest that strategies toward increasing E-selectin ligand expression could be applicable as part of a multifaceted approach to optimize the production of HSPCs from human PSCs. 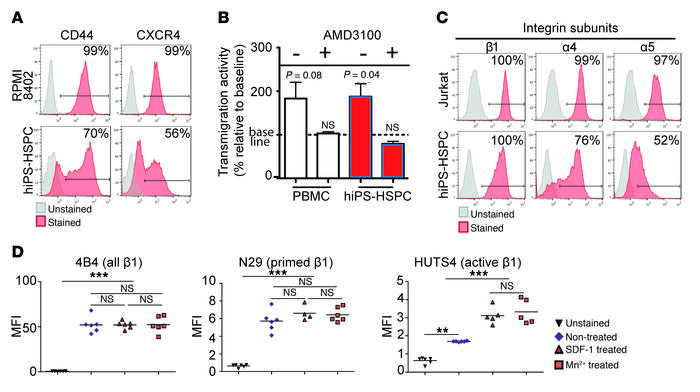